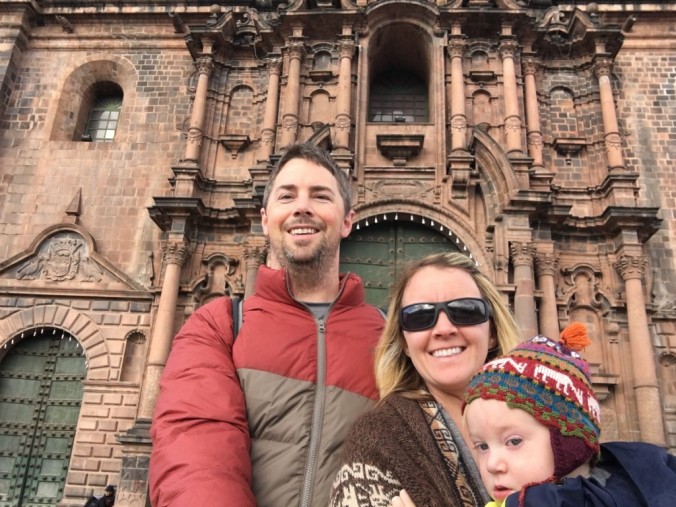 The next two days we took turns staying inside with Little Monkey, for the most part. JZ took the official tour of the Cathedral. While attending mass there was awesome, if I had the time I would have paid for the tour as well. You just don’t get to really be a tourist when you attend mass. There are security guards all over the place making sure that you “don’t look while you pray”. Even for non-Catholics, the tour is well worth the money. JZ paid for the self guided tour and very much enjoyed the experience. Touring the Cathedral is a must, coming in is our #1 recommended thing to do in Cusco.

JZ tagged me out and I took a mommy-break to get a massage. There are massage hustlers all over the square promising a great massage for 35 soles, more or less. These are just Joe Schmoes that will take you to a back alley room and rub you down. I opted for the legit salon that our hostel recommended. It was 100 soles and just one block from the hostel. These are actually massage therapist and more what I was looking for in ambiance. Coming in around $30 it was still a killer deal.

We did venture out with Little Monkey for dinner most nights. (We kind of had to, and also figured that since the doctor said it was ok- he could do with a change of scenery once a day). He also was showing massive improvements by Monday evening, and so we knew we were on the right track for his recovery. Mr. Lima was in Cusco for the week (work brought him there) and we met up with him as often as possible for dinner. It was so nice to continue visiting with him, and always nice to have a translator.   We had gotten so used to having him around we hated to leave Peru and not see him every other day. Looking forward to our next visit with him, maybe when he comes our way!

For dinner, Monday night we did the famous PapaChos. PapaChos has delicious burgers. It does have that chain-style Friday’s feel, and a little pricey, but so amazing. You can get burgers here that just aren’t possible in other parts of the world (one word-alpaca). Although not super budget friendly, well worth the splurge.

Tuesday was our follow up appointment with the doctors. On the way to the appointment we maximized our outing by hitting some tourist location on our list: 1. Choco Museo. We took their free tour and samples and then purchased some take home chocolate items. Highly recommend taking the time for this. 2. Iglesia San Francisco. The church is free admission and is located in Plaza San Francisco. Mass was going on but we quietly walked around and stopped to say some prayers, thanking God and the Saints for healing our sweet baby boy.

At the appointment, both doctors seemed very pleased with his progress. The pediatrician prescribed another round of medication and continued to advise us not to travel to higher elevation or colder climate, and if we could stay in Cusco another couple days that would be best. We celebrated by wrapping up our babe and having a beer. We even made the Facebook page at Qosqo Beer House. This place is worth a visit. However, we learned here that we wouldn’t be getting any local brew on tap- they only serve that in the sacred valley. Now we know…next time. We met up with Mr. Lima for dinner again, this time we had pizza and I finally got to order a bottle of Peruvian Wine.

Wednesday we took a fantastic private tour to Tipon. I feel that this is somehow really underplayed in the travel books and websites. It is a gorgeous ruin and so peaceful. I guess because it is compared to Machu Picchu, but it is just so different that I feel like it is apples to oranges. Both fruit, but not the same. The private tour was amazing. It was $120 soles per adult and he drove us to several tourist sites in the Southern Valley. He was very well prepared and so accommodating. After we visited the ruins in Tipon he took us to a local restaurant and ordered us a plate of cuy (Guinea Pig). The family had a turkey on the back patio that Little Monkey really got a kick out of. I’m assuming they also raised the Guinea Pig we ate. The cuy was gamey, like a combination of duck and rabbit. Worth a try, but not something I’ll likely crave in the future. 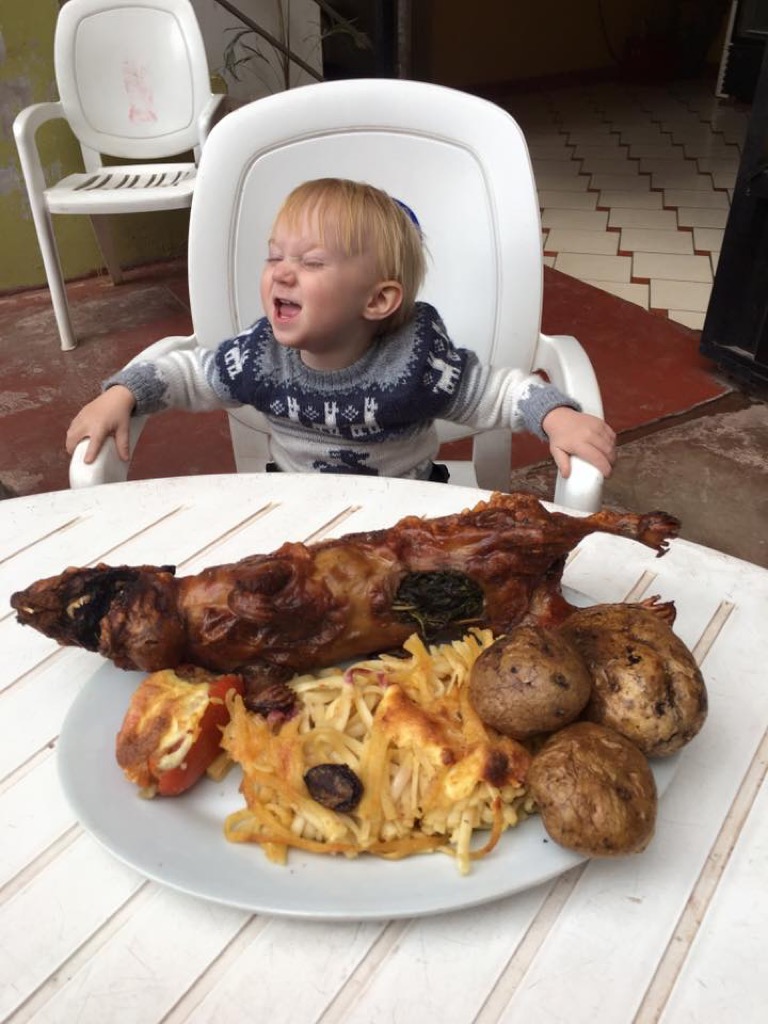 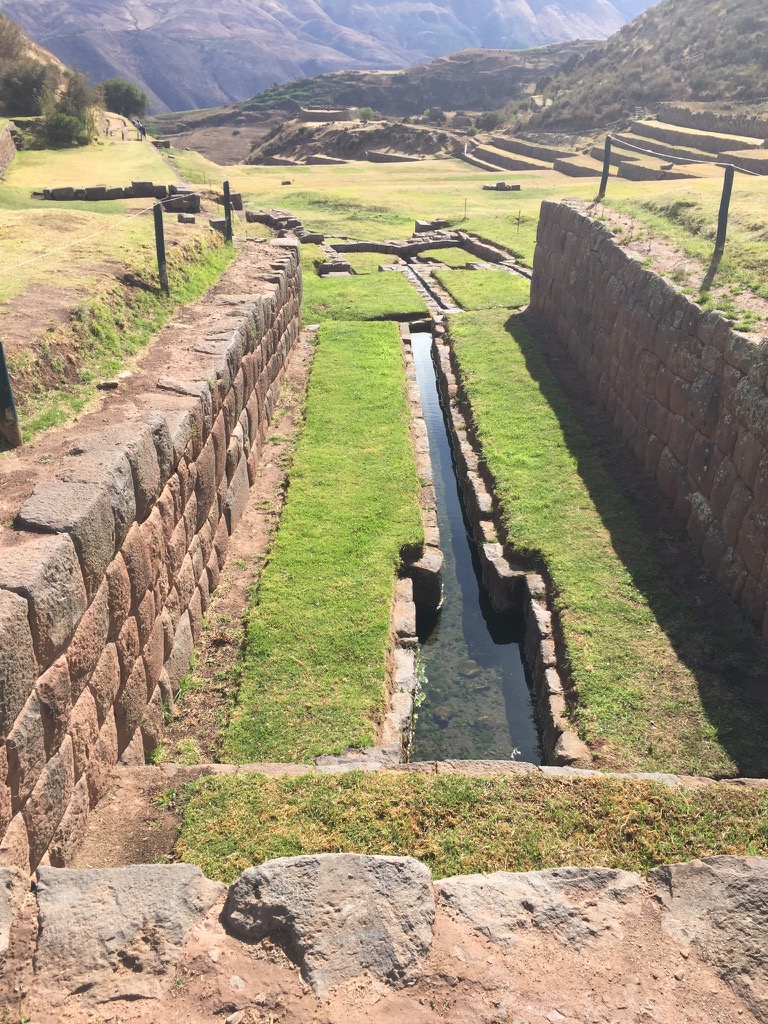 In addition to Tipon, we also visited Pikillacto, a pre-Incan city. I’m not sure what it was about this place, maybe that it was even older than the Incans, or that you could really visualize the hustle and bustle of an ancient city there still, but it felt mystical to me. It could also have been the ominous clouds overhead and the storm that we avoided. 😉 As part of this we visited the former gateway of Peru. You could see in the stones where the Incans took over and added onto the architecture. This spot used to be the gateway to Argentina and Chile. I could just imagine the road that kept going and going, and walking it with donkey or llama. Little Monkey stood in the gateway and I thought “Go Little Monkey, go see the world!” My heart was happy. 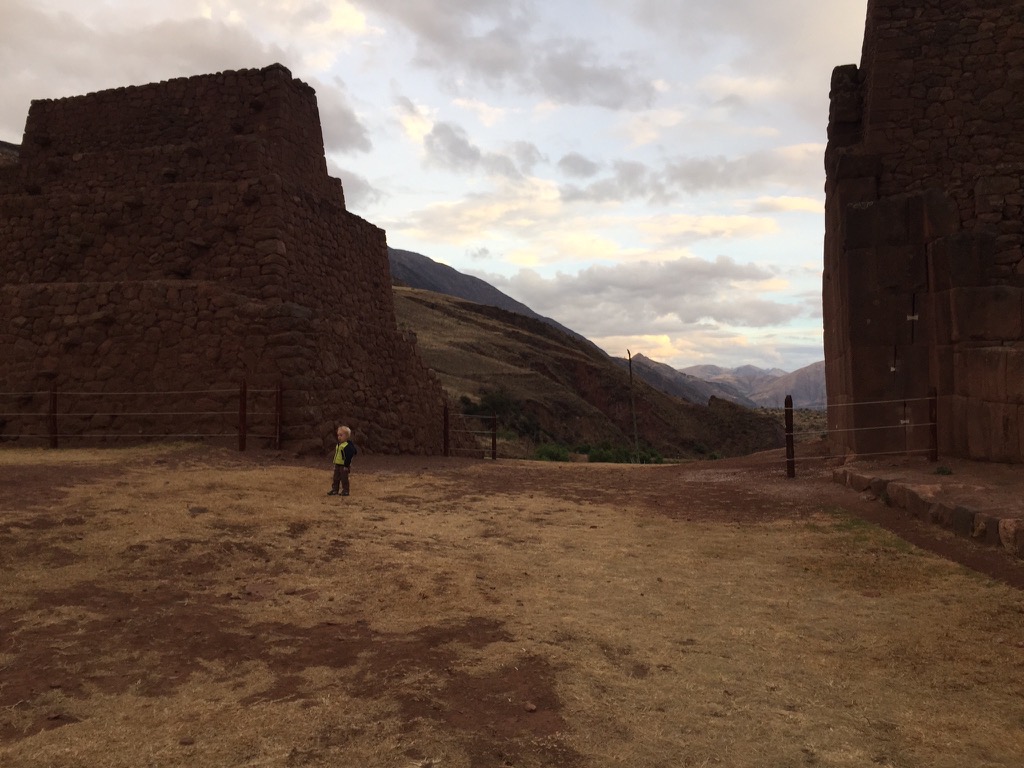 I was, for a minute, set on trying chicha (corn beer), because it was mentioned in lonely planet. Turns out, it is actually more like moonshine and quite difficult to come by. Each village in the southern valley specializes in some commodity, and there was a village that specialized in chicha. Our tour guide was reluctant but willing to take me into the village and find me some chicha if I was truly set on it. By the time we had eaten the cuy I decided that was enough culinary adventure for me and passed on hunting down the chicha. Maybe, next time. Maybe never. If we had more time, or bigger stomachs, there was a village that specialized in chicharones (fried pork) but the cuy was the long/short list of our local cuisine that day. If we could have gone back though for the chicharones we would have gone back to that village.

Wednesday night we stayed close to the hostel and ate at a nice restaurant. We ordered local food but nothing too adventurous. Unfortunately, Mr. Lima got caught at work and so we never got to give him a proper goodbye. Though I’m not worried because he is family now. We are thankful that our neighbors back in Tahoe introduced us to him via social media and that we were able to make such a great connection while in Peru.

Before leaving, we somehow also fit in a stroll around San Blas. We found some chick bracelets here for both of us, and I discovered a posh coffee shop that operates as a non profit. The Meeting Place. It felt a bit like being in Seattle, but the familiarity was welcoming at this point of our trip. We stumbled across a proper market and saw where the actual locals have their lunches. 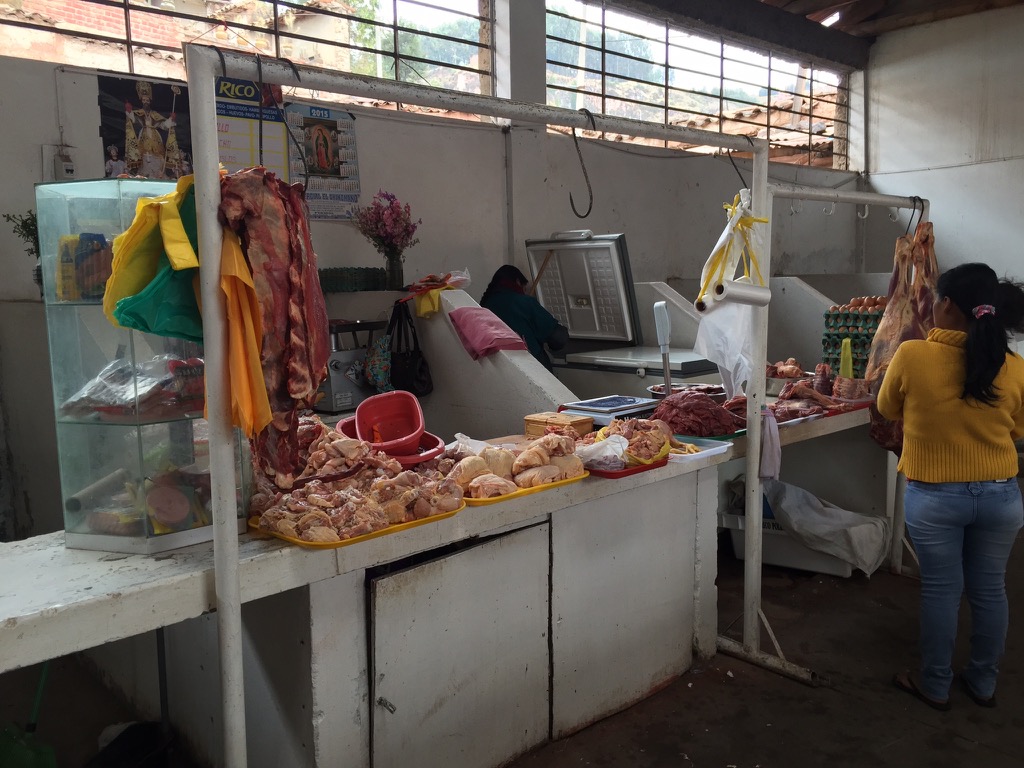 Thursday, we said goodbye to Cusco. Our baby was now healthy, and the airline still didn’t have our flight information figured out. It all worked out eventually, but what a stress case! Seizing the day and wanting to enjoy every single moment of the adventure, we squeezed in another day-venture before we headed to the airport. Checking Qorikancha (insert Wikipedia link) off our list was worth it. We didn’t do the museum- we did the 10 soles entrance for the monument. While leaving, we got ourselves into some lama drama. The perfect ending to our Cusco chapter. 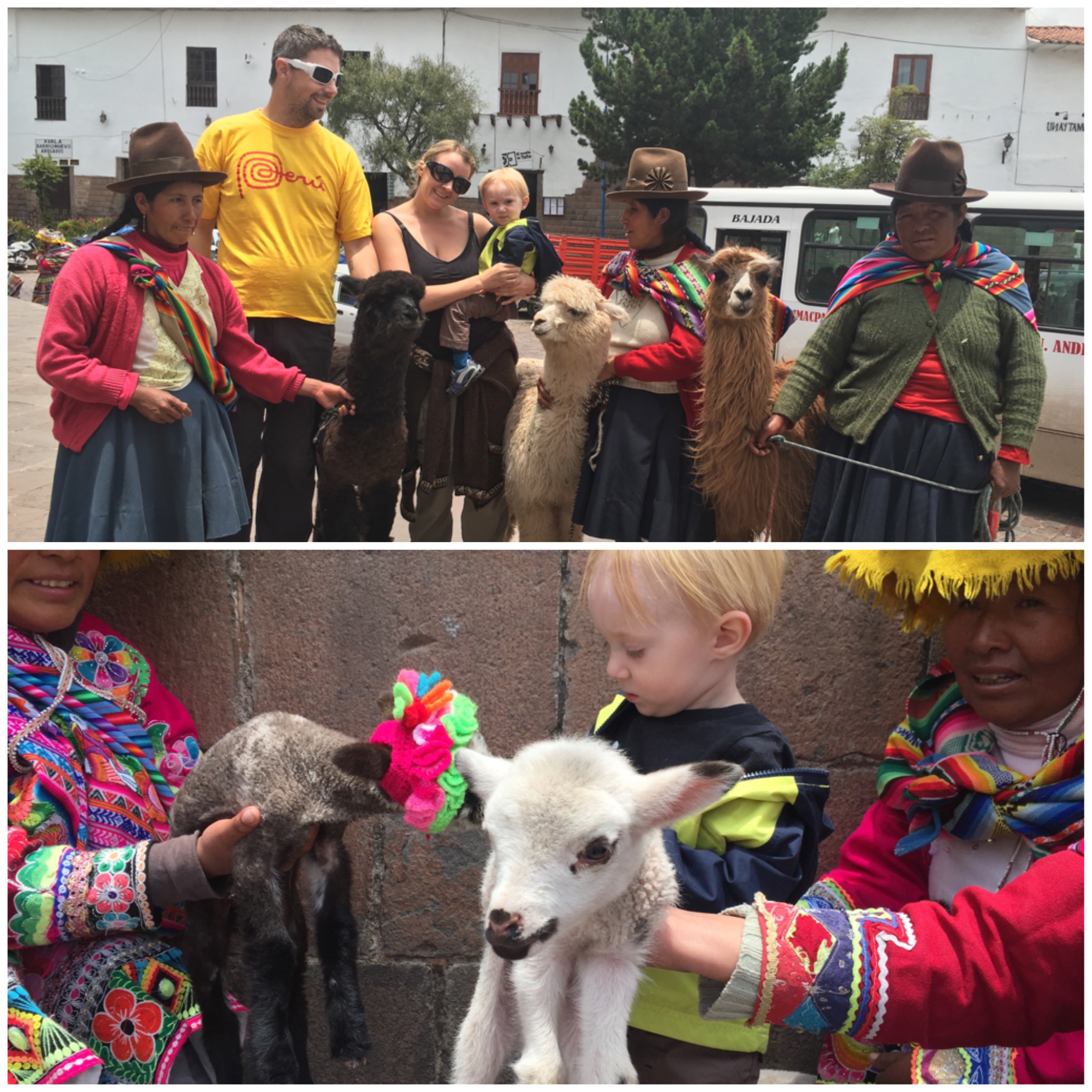